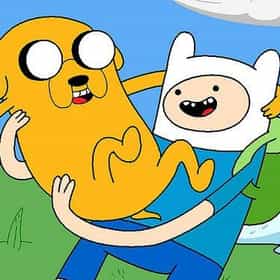 Adventure Time is an American animated television series created by Pendleton Ward for Cartoon Network. The series follows the adventures of Finn, a human boy, and his best friend and adoptive brother Jake, a dog with magical powers to change shape and grow and shrink at will. Finn and Jake live in the post-apocalyptic Land of Ooo. Along the way, they interact with the other main characters of the show: Princess Bubblegum, The Ice King, and Marceline the Vampire Queen. The series is based on a short produced for Nicktoons and Frederator Studios' animation incubator series Random! Cartoons. After the short became a viral hit on the Internet, Cartoon Network picked it up for a ... more on Wikipedia

Adventure Time is ranked on...

Adventure Time is also found on...