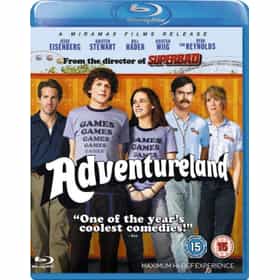 Adventureland is a 2009 American comedy-drama film written and directed by Greg Mottola, starring Jesse Eisenberg and Kristen Stewart and co-starring Ryan Reynolds, Bill Hader, Martin Starr, and Margarita Levieva. The film is set in the summer of 1987 when recent college grad James Brennan is making big plans to tour Europe and attend graduate school in pursuit of a career in journalism. However, financial problems force him to look for a summer job instead of traveling abroad, which places him at Adventureland, a run-down amusement park in western Pennsylvania. There he meets Emily Lewin, a co-worker with whom he develops a quick rapport and relationship. Released on April 3, 2009, ... more on Wikipedia

Adventureland is ranked on...

Adventureland is also found on...