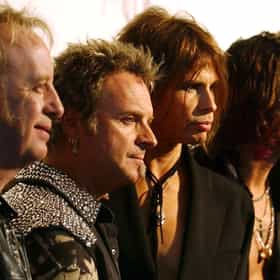 Aerosmith is an American rock band formed in Boston, Massachusetts, in 1970. The group consists of Steven Tyler (vocals, keyboards), Joe Perry (guitar), Tom Hamilton (bass), Joey Kramer (drums), and Brad Whitford (guitar). Their style, which is rooted in blues-based hard rock, has come to also incorporate elements of pop rock, heavy metal, and rhythm and blues, and has inspired many subsequent rock artists. They are sometimes referred to as "the Bad Boys from Boston" and "America's Greatest Rock and Roll Band".Perry and Hamilton, originally in a band together called the Jam Band, met up with Tyler, Kramer, and guitarist Ray Tabano, and formed Aerosmith. In 1971, ... more on Wikipedia

The Best Aerosmith Songs of All Time 11.2k votes Here's a list of songs by veteran American hard rockers Aerosmith ranked from best to worst by the Ranker community. The ban...
Insane Stories From Aerosmith's Drug-Fueled Rise To The Top 240.2k views Just how much did Aerosmith embrace the sex and drugs typically associated with a rock-and-roll lifestyle? Well, if it's any...
The Best Aerosmith Albums of All Time 3k votes This Aerosmith discography is ranked from best to worst, so the top Aerosmith albums can be found at the top of the list. Si...

Aerosmith is ranked on...

#12 of 350 The Greatest Classic Rock Bands 485.1k VOTES The greatest classic rock bands of all time embody the spirit of a generation of people who just wanted to rock. These top c...
#102 of 465 The Best Current Pop Groups/Singers 471.6k VOTES A list of the best current pop groups and singers who are making some of the best pop songs of 2019. The battle between...
#28 of 411 The Greatest Musical Artists of the '90s 1M VOTES   Take a big whiff- "mmmbop", it smells like the '90s in here! An incredibly eclectic decade for music, the...
#33 of 380 The Best Pop Artists of the 1980s 378.1k VOTES The 1980s was a huge decade in terms of breaking pop stars. 80s artists benefited from the rising popularity of cable televi...
#350 of 358 The Worst Rock Bands of All Time 746.8k VOTES Here they are: the absolute worst rock bands in history, ranked from the most awful bands to the kind of okay but still pret...
#15 of 505 People who voted for Aerosmith... People in the Central US are 2x more likely to vote for this The Greatest Musical Artists of the '80s 562.6k VOTES   The greatest and most prolific artists of music's most colorful decade are remembered on this list. This list is ba...
#133 of 139 People who voted for Aerosmith... People over 50 are 2x more likely to vote for this The Most Undeserving Members of the Rock Hall of Fame 407.6k VOTES The most undeserving members of the Rock Hall of Fame are all respectable and successful musicians and bands but quite simpl...
#4 of 50 Who Is The Most Famous Band From Every State? 15.8k VOTES There is no shortage of incredible music in the United States. Pretty much every part of the country has produced a sle...
#4 of 350 The Greatest American Rock Bands 1.3M VOTES Some of the greatest bands in rock history are from the United States. While the merits of their musical prowess can be fair...
#36 of 126 Bands Or Artists With Five Great Albums 24.6k VOTES Building a successful band is tough but keeping it going is much tougher. Even some of history's biggest, best-selling ...
#7 of 12 Rock Bands That Have Tarnished Their Legacies 17.6k VOTES Even the most successful bands have had their share of problems – it’s the nature of the beast. Personal tensions can become...
#5 of 28 The Best All-Time Super Bowl Halftime Performers 33.1k VOTES Who is the best all-time Super Bowl halftime performer? Super Bowl halftime performers include some of the musical giants in...
#15 of 17 The Hardest Hard Rock And Metal Band Funko Pops 486 VOTES Heavy metal heads, rejoice! Hard rock Funko Pop toys are here to cater to all your head banging desires. While in their plas...
#8 of 75 The Best Dadrock Bands That Are Totally Worth Your Time 23.8k VOTES The Urban Dictionary defines "Dadrock" as "classic rock you first heard from your dad's old re...
#2 of 6 Simpsons Musical Guests and Musician Cameos 92 VOTES Musicians and bands who have guest starred on The Simspons over the years. This list contains every musical act that has don...
#13 of 13 Great Bands That Really Jumped the Shark with That One Album 391 VOTES If you think about it, the most prolific bands have the highest chance of putting out at least one album that's total sh*t -...
#7 of 211 The Best Hard Rock Bands/Artists 196.3k VOTES Hard rock is a genre that started with bands like Cream, Mountain, Steppenwolf, and Grand Funk in the late 1960s and early 1...
#79 of 293 The Best Sleaze Rock Bands 11.8k VOTES Sleaze rock has a number of connotations associated with it, but the one most common is its association with the hair metal ...
#7 of 95 The Best Glam Metal Bands 18.6k VOTES The 1980s offered music listeners a new type of sound in terms of glam bands. Before, people glam bands meant over-the-top p...
#19 of 25 The Best Boogie Rock Bands/Artists 2k VOTES Boogie rock artists list, with photos, ranked best to worst by votes. List of good boogie rock bands includes a filter so yo...
Every Single Thing And Person Morrissey Has Publicly Declared He Hates 10.3k VIEWS Few celebrities are as vociferously, enthusiastically opinionated as Morrissey, and the celebrated singer/songwriter seeming...
#1 of 152 The Best Musicians Who Performed on SNL In The '00s 395 VOTES From the 9/11 attacks to the writers strike that shortened season 33 to some big cast shakeups mid-decade, Saturday Night Li...
#26 of 30 The Best SPIN Covers 1.5k VOTES List of the most memorable SPIN Magazine covers, featuring the coolest photographs, sexiest celebrity shots, and most innova...

Aerosmith is also found on...