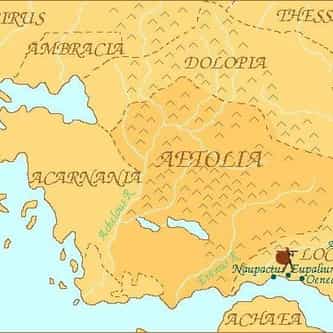 The Aetolian campaign, often referred to as "Demosthenes' Aetolian campaign", was a failed Athenian offensive in northwestern Greece during the Archidamian War. In 426 BCE, Demosthenes was dispatched from Athens to the Corinthian Gulf in command of a fleet of 30 ships. Arriving in the northwest, he quickly assembled a coalition force from Athens' allies in the region and besieging the city of Leucas. Before that siege reached a conclusion, however, he was persuaded to abandon it ... more on Wikipedia