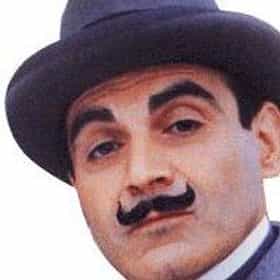 Agatha Christie's Poirot is a British television drama that aired on ITV from 8 January 1989 to 13 November 2013. David Suchet stars as the eponymous detective, Agatha Christie's fictional Hercule Poirot. Initially produced by LWT, the series was later produced by ITV Studios. In the United States, PBS and A&E have aired it as Poirot. At the programme's conclusion, which finished with Curtain, based on the final Poirot novel, every major literary work by Christie that featured the title character had been adapted. ... more on Wikipedia

Agatha Christie's Poirot is ranked on...

#251 of 2,297 People who voted for Agatha Christie's Poirot... also upvote Harry Potter Franchise on The Most Rewatchable Movies also upvote Harry Potter Franchise on The Best Movies of All Time The Greatest TV Shows Of All Time 1.5M VOTES Choosing the best TV shows of all time means taking into account the best TV dramas, the best TV comedies, the best cartoons...
#191 of 391 TV Shows That Only Smart People Appreciate 1.3M VOTES Since about the early 2000s, TV audiences have been blessed with what many experts call The Golden Age of Television. In oth...
#19 of 39 The Best Original Series On Acorn TV 428 VOTES The subscription streaming service Acorn TV has distinguished itself by not only producing original content but by being the...
#88 of 123 The Best Serial Cop Dramas of All Time 38.7k VOTES The best serial cop dramas of all time include long-running police television shows that managed to combine elements of myst...
#3 of 26 The Best Movies Based on Agatha Christie Stories 538 VOTES Given The Guinness Book of Word Records lists her as the bestselling author of all time, it is no surprise Agatha ...
#2 of 57 TV Shows We've Already Seen (And Loved) As Both Movies And Books 445 VOTES TV show adaptations of books often have an advantage over adapting books into movies. On the big screen, the material might ...
#659 of 686 The Greatest Shows of the 1990s, Ranked 262.9k VOTES In the 1990s, television was one of the fastest growing mediums. More TV shows were popping up than ever before, and ratings...
#37 of 134 People who voted for Agatha Christie's Poirot... People outside of the US are 2x more likely to vote for this also upvote Harry Potter Franchise on The Most Rewatchable Movies The Best TV Crime Dramas 35.9k VOTES The very best crime fiction shows on television, ranked from best to worst. This is a list of the greatest crime fiction sho...
#5 of 171 The Best Mystery TV Shows 71.4k VOTES The best Mystery TV shows make trying to solve a great mystery exciting for both the fans and characters. Nothing beats the ...
#1 of 27 The Best Historical Mystery Series 386 VOTES The best period detective series and historical mystery shows let you experience a different time period while also enjoying...
#58 of 136 The Best UTV TV Shows 455 VOTES List of popular UTV shows, ranked from best to worst. This list of the top current and cancelled UTV TV series includes the ...