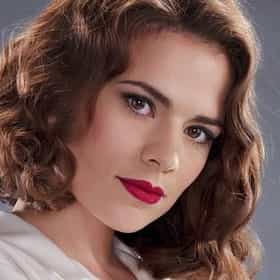 Marvel's Agent Carter, or simply Agent Carter, is an American television series created for ABC. The series features the Marvel Comics character Peggy Carter, with Hayley Atwell reprising her role from the film series and One-Shot, as she must balance life as a secret agent with that of a single woman in 1940s America. Despite a positive critical response, viewership fell steadily, and on May 12, 2016, ABC canceled Agent Carter. ... more on Wikipedia

Agent Carter is ranked on...

#864 of 2,298 The Greatest TV Shows Of All Time 1.4M VOTES Choosing the best TV shows of all time means taking into account the best TV dramas, the best TV comedies, the best cartoons...
#194 of 383 The Best TV Shows of The Last 20 Years 1.5M VOTES This best TV show list represents the combined opinions of thousands of TV fans. Anyone can vote on this list of the best TV...
#5 of 67 The Best New TV Series of 2015 27.7k VOTES This list of the best new shows of 2015 ranks all of 2015's new scripted series and gives television fans a place to voice t...
#125 of 198 The Greatest TV Shows for Women 118.5k VOTES Behold, a complete list of the greatest TV shows for women, ranked by ladies who love to watch television! For stay-at-home ...
#31 of 66 The Best ABC Shows of All Time 20k VOTES   List of the best ABC shows of all time, ranked by fans who watch them live or as re-runs. Since its acceptance into...
#42 of 187 The Best TV Shows You Can Watch On Disney+ 13.3k VOTES Launched in the fall of 2019, Disney+ offered new shows based on Disney, Marvel, and Star Wars properties alongside old favo...
#2 of 13 Here's How Your Favorite Canceled TV Shows Were Really Supposed To End 51.2k VOTES There is a risk every TV lover takes when letting a new show into their hearts, and that is the chance that they will be can...
#58 of 128 Canceled Shows We'd Most Like to See as Movies 204.9k VOTES This list of canceled shows we'd like to see as movies includes a lot of huge cult favorites. Obviously this list isn't comp...
#20 of 51 What to Watch If You Love 'Supergirl' 219 VOTES Thanks to the expansive Arrowverse on The CW, Supergirl has flown onto our television sets to entertain and thrill the most ...
#32 of 36 The Best Stan Lee Cameos 3.1k VOTES A Stan Lee cameo is just as iconic to the Marvel film universe as the characters that lead the films. Plus, he gets to do th...
#29 of 46 What to Watch If You Love 'The Flash' 172 VOTES The Flash kept viewers on the edge of their seats with action-packed superhero drama, so it's no surprise that you’d be on t...
#32 of 51 What to Watch If You Love 'Jessica Jones' 168 VOTES Jessica Jones kept viewers on the edge of their seats with Marvel Cinematic Universe excitement, so it's no surprise that yo...
#21 of 50 What to Watch If You Love 'Legends of Tomorrow' 170 VOTES Following the success of Arrow and The Flash, the DC television universe was expanded with Legends of Tomorrow fea...
#9 of 50 The Best New Sci-Fi Shows of the Last Few Years 45.4k VOTES With so many great TV series currently airing, we’re ranking the best sci-fi TV shows since 2015. Our list of the highest ra...
#15 of 99 The Best Espionage TV Shows 11.3k VOTES Lies! Deception! Betrayal! Romance! Spies! These are the very best espionage shows on television, ranked from best to worst....
#17 of 20 The Best Current Supernatural Shows 2.5k VOTES Supernatural TV series are at a disadvantage from the word "go." A good TV show already requires a great cast, bri...
#42 of 110 The Best TV Shows Set In L.A. 2k VOTES Los Angeles, California is not only where most television series are filmed, but it also tends to be where they're set as we...
#79 of 135 The Best ABC Shows of the 2010s 3.2k VOTES The way we watch TV may be changing, but this list of 2010s ABC shows makes it clear that network television still boasts gr...
#16 of 69 The Best Ever Spy TV Shows 37.1k VOTES The very best spy shows on television, ranked from best to worst, including British spy TV shows and series. This list of th...
#10 of 54 The Best Marvel Comic Book TV Show of All Time 2.1k VOTES Marvel's Cinematic Universe is expansive, reaching all the way to superhero shows on Netflix and carrying on a long traditio...
#11 of 34 Good TV Shows for 12 Year Olds 3.4k VOTES Guiding what a 12-year-old watches (or at least trying to) can be complicated. They are right on the cusp of tween and teena...
#32 of 42 The Best Recent Spy Shows and Movies 665 VOTES The spy movie and film genre has included some of Hollywood's greatest films of all time. Classics like Dr. No, the first Ja...