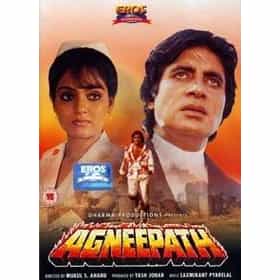 Agneepath is a 1990 Indian drama film directed by Mukul Anand. It stars Amitabh Bachchan as the main protagonist Vijay Deenanath Chauhan along with Mithun Chakraborty, Madhavi, Neelam Kothari, Rohini Hattangadi and Danny Denzongpa as the antagonist Kancha Cheena. The film was produced by Yash Johar. The title was taken from a poem of the same name called 'Agneepath' which was penned by Harivansh Rai Bachchan, Amitabh's father, and which is recited at the beginning of the movie and creates a thematic link that continues through the movie, particularly in the climax, both literally and metaphorically. ... more on Wikipedia

Agneepath is ranked on...

Agneepath is also found on...