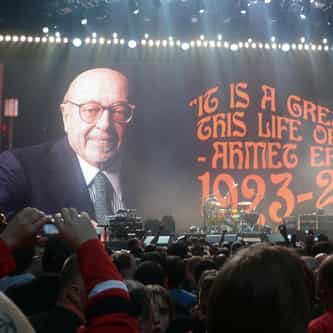 Ahmet Ertegun (, Turkish spelling: Ahmet Ertegün ([ahˈmet eɾteˈɟyn]; July 31 [O.S. 18 July] 1923 – December 14, 2006) was a Turkish-American businessman, songwriter and philanthropist. Ertegun was best known as the co-founder and president of Atlantic Records and for discovering and championing many leading rhythm and blues and rock musicians. He also wrote classic blues and pop songs. In addition he served as the chairman of the Rock and Roll Hall of Fame and museum, located in ... more on Wikipedia