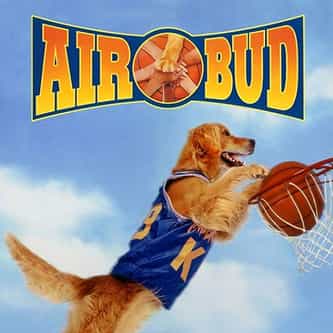 Tagline
He Sits. He Stays. He Shoots. He Scores.
The dog is in the house.

Air Bud is a 1997 American family comedy film that sparked the franchise centered on the real-life dog, Buddy, a Golden Retriever. The film was financially successful, grossing $4 million in its opening weekend and totaling $27.7 million in its run, against an estimated $3 million budget. It was the very first film produced by both Disney and Warner Bros. with Disney handling American distribution and Warner Bros. with the UK distribution. ... more on Wikipedia

Air Bud IS LISTED ON