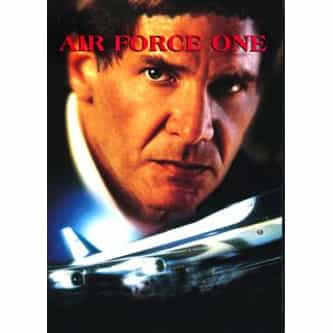 Tagline
The fate of a nation rests on the courage of one man.
Impenetrable. Invincible. In Trouble.
Harrison Ford is the President of the United States.

Air Force One is a 1997 American political action thriller film written by Andrew W. Marlowe and directed and co-produced by Wolfgang Petersen. It is about a group of Russian terrorists that hijack Air Force One. The film stars Harrison Ford and Gary Oldman, as well as Glenn Close, Xander Berkeley, William H. Macy, Dean Stockwell, and Paul Guilfoyle. A box office success with generally supportive critical reviews, the film was one of the most popular action films of the 1990s, and sitting ... more on Wikipedia

Air Force One IS LISTED ON