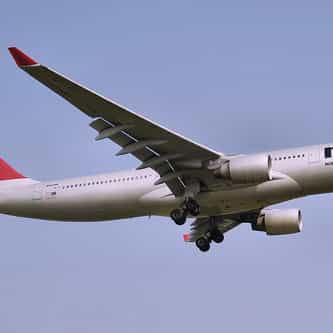 The Airbus A330 is a medium wide-body twin-engine jet airliner made by Airbus, a division of Airbus Group. Versions of the A330 have a range of 7,400 to 13,430 kilometres and can accommodate up to 335 passengers in a two-class layout or carry 70 tonnes of cargo. The A330's origin dates to the mid-1970s as one of several conceived derivatives of Airbus's first airliner, the A300. The A330 was developed in parallel with the four-engine A340, which shared many common airframe components but ... more on Wikipedia