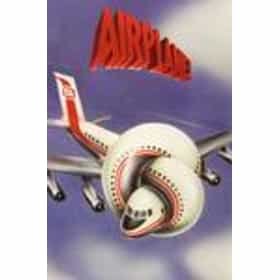 Airplane! is a 1980 American satirical disaster comedy film directed and written by David Zucker, Jim Abrahams, and Jerry Zucker and released by Paramount Pictures. It stars Robert Hays and Julie Hagerty and features Leslie Nielsen, Robert Stack, Lloyd Bridges, Peter Graves, Kareem Abdul-Jabbar, and Lorna Patterson. The film is a parody of the disaster film genre, particularly the 1957 Paramount film Zero Hour!, from which it borrows the plot and the central characters, as well as many elements from Airport 1975. The film is known for its use of surreal humor and its fast-paced slapstick comedy, including visual and verbal puns and gags. Airplane! was a critical and financial success, ... more on Wikipedia

The Funniest Quotes From 'Airplane!' 2.1k votes The best quotes from Airplane! make you realize how funny the movie really is, even if you haven't seen it in a while, let's...

Airplane! is ranked on...

Airplane! is also found on...