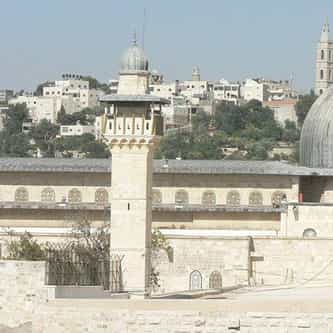 Al-Aqsa Mosque, also known as Al-Aqsa and Bayt al-Muqaddas, is the third holiest site in Islam and is located in the Old City of Jerusalem. The site on which the silver domed mosque sits, along with the Dome of the Rock, also referred to as al-Haram ash-Sharif, is the Temple Mount, the holiest site in Judaism, the place where the Temple stood before being destroyed by the Romans in 70 CE. Muslims believe that Muhammad was transported from the Sacred Mosque in Mecca to al-Aqsa during the ... more on Wikipedia

Al-Aqsa Mosque IS LISTED ON

best states for fishing, dayton ohio attractions, strange laws in the us, most beautiful cities in the us, famous truss bridge, places to visit in cold weather, tallest building in cleveland, worst college mascots, kids tv shows 2010, did john dickinson sign the constitution