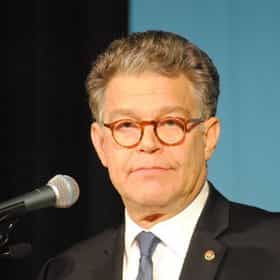 Alan Stuart Franken (born May 21, 1951) is an American politician, comedian, media personality, and author who served as a United States Senator from Minnesota from 2009 to 2018. He became well known in the 1970s and 1980s as a staff writer and performer on the television comedy show Saturday Night Live (SNL). After decades as a comedic actor and writer, he became a prominent liberal political activist, hosting The Al Franken Show on Air America Radio. Franken was first elected to the United States Senate in 2008 as the nominee of the Minnesota Democratic–Farmer–Labor Party (DFL, an affiliate of the Democratic Party), defeating incumbent Republican Senator Norm Coleman by 312 votes out ... more on Wikipedia

Al Franken is ranked on...

Al Franken is also found on...