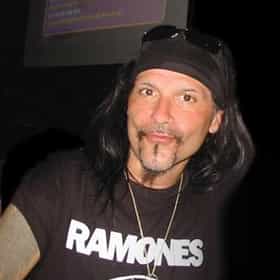 Allen David Jourgensen (born Alejandro Ramírez Casas; October 9, 1958) is a Cuban-American singer-songwriter, musician and music producer. Closely related with the independent record label Wax Trax! Records, Jourgensen has an active musical career that spans four decades, and is best known as the frontman of the industrial rock band Ministry, which he founded in 1981 and of which he remains the only constant member. He was also primary musician of several Ministry-related projects, such as Revolting Cocks, Lard, Buck Satan and the 666 Shooters. He has also produced and/or recorded with numerous other artists, including The Reverend Horton Heat, Prong, Skinny Puppy, Front Line ... more on Wikipedia

Al Jourgensen is ranked on...

#168 of 413 People who voted for Al Jourgensen... People in the Midwest are 2x more likely to vote for this also upvote Jackass Franchise on The Absolute Most Hilarious Movies Ever Made The Best Frontmen in Rock 774.1k VOTES   Giving out the title of best frontman in rock is like crowning someone the king of rock and roll. There are so many...
Ages of Rock Stars 27.6k VIEWS Do you know the ages of rock stars you listen to? Well, here you have them: the ages of top rock stars listed by fame and no...
70+ Celebrities Who Have Almost Died 1.7M VIEWS Every day, people all over the world we never hear about are involved in incidents that could easily be fatal. The ones we d...
#103 of 155 The Best Electronic Body Bands/Artists 5.5k VOTES Electronic body music artists list, with photos, ranked best to worst by votes. List of good electronic body bands includes ...
Famous People Named Allen 256 VIEWS List of famous people named Allen, along with photos. How many celebrities named Al can you think of? The famous Allens belo...

Al Jourgensen is also found on...