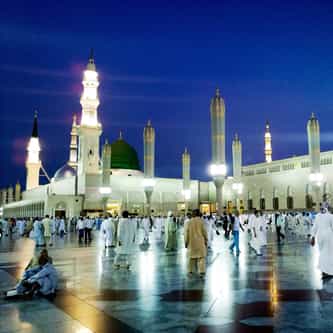 Al-Masjid an-Nabawī, also called the Prophet's Mosque, is a mosque established and originally built by the Islamic prophet Muhammad, situated in the city of Medina. Al-Masjid an-Nabawi was the second mosque built in the history of Islam and is now one of the largest mosques in the world. It is the second-holiest site in Islam, after al-Masjid al-Haram in Mecca. The site was originally adjacent to Muhammad's house; he settled there after his Hijra to Medina in 622 CE. He shared in the heavy ... more on Wikipedia

Al-Masjid an-Nabawi IS LISTED ON