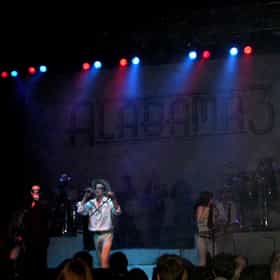 Alabama 3 is an English band mixing rock, electronic, blues, country, gospel, and spoken word styles, founded in Brixton, London in 1995. In the United States, the band is known as A3, allegedly to avoid any possible legal conflict with the country music band Alabama. The group achieved international fame when the producers of hit TV series The Sopranos chose the track "Woke Up This Morning" for the show's opening credits. The band is notable for their fusion of styles, ironic lyrics, intentionally humorous personae, and outrageous live performances. Every member of the group has an alias, the band's founding members adopting the personas Larry Love and The Very Reverend Dr. ... more on Wikipedia

#253 of 311 The Best Electronic Bands & Artists 14.4k VOTES With the growth of electronic dance music, it's easy to forget that there's a separate genre called electronic music. Not al...
Bands & Musicians Who Played Concerts in Prison 4.5k VIEWS Bands who played shows in prisons come from a wide variety of backgrounds, including everyone from Frank Sinatra&n...