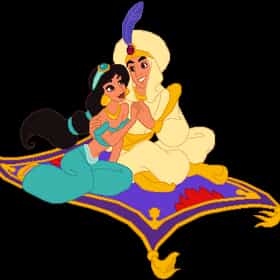 Aladdin is an animated television series made by Walt Disney Television Animation which aired from 1994 to 1995, based on the original 1992 Disney film of the same name. It was animated at the Slightly Offbeat Productions Studios in Penrose, Auckland, New Zealand. The series followed the direct-to-video sequel The Return of Jafar, and picked up where that installment left off, with Aladdin still living on the streets of Agrabah, but now engaged to beautiful and spunky Princess Jasmine. "Al" and Jasmine, along with monkey sidekick Abu, the animated Magic Carpet, and the fast-talking, shape-shifting Genie came along to help, as did sassy, complaining parrot Iago, formerly ... more on Wikipedia

Aladdin is ranked on...

#323 of 385 The Best Kids Cartoons of All Time 1.2M VOTES This list contains information about the best kids cartoons, ranked by your votes. Over the years, there have been tons of g...
#62 of 477 The Greatest Animated Series Ever Made 642.2k VOTES The top animated series of all time include some of the best TV shows ever to flicker in your living room (or on your comput...
#4 of 23 The Best Disney Shows of the '90s 1.4k VOTES How many of you remember racing home from school in the '90s to see what was on The Disney Channel? 1990s Disney shows were ...
#152 of 1,328 The Best Guilty Pleasure TV Shows 19.7k VOTES List of the best guilty pleasure TV shows, past and present, including sitcoms, dramas, reality shows, and game shows. These...
#30 of 57 TV Shows We've Already Seen (And Loved) As Both Movies And Books 445 VOTES TV show adaptations of books often have an advantage over adapting books into movies. On the big screen, the material might ...
#51 of 686 The Greatest Shows of the 1990s, Ranked 262.9k VOTES In the 1990s, television was one of the fastest growing mediums. More TV shows were popping up than ever before, and ratings...
#39 of 106 The Best Disney Channel TV Shows 203.2k VOTES This list of the top current and cancelled Disney Channel TV series includes the date when each show first aired, as well as...
#6 of 51 The Best Toon Disney TV Shows 10.6k VOTES List of popular Toon Disney shows, ranked from best to worst. This list of the top Toon Disney TV series, both current and...
#13 of 41 Good TV Shows for 5 Year Olds 257 VOTES Finding the best TV shows for 5-year-olds to watch can be tricky. A lot of those shows for little kids can still feel like t...

Aladdin is also found on...