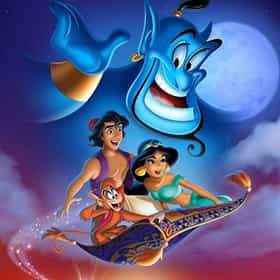 Aladdin is a 1992 American animated musical fantasy film produced by Walt Disney Feature Animation and released by Walt Disney Pictures. Aladdin is the 31st animated feature in the Walt Disney Animated Classics series, and was part of the Disney film era known as the Disney Renaissance. The film was directed by John Musker and Ron Clements, and is based on the Arab folktale of Aladdin and the magic lamp from One Thousand and One Nights. The voice cast features Scott Weinger, Jonathan Freeman, Robin Williams, Linda Larkin, Frank Welker, Gilbert Gottfried, and Douglas Seale. ... more on Wikipedia

'Aladdin' Fan Theories More Mind-Boggling Than The Cave Of Wonders 1.4k votes While many children growing up in the '90s likely watched Aladdin multiple times - and many of them are revisiting the Disne...
Every Song in Aladdin, Ranked by Singability 1.2k votes We're ranking the best songs from Disney's Aladdin. Based on an old folktale, the 1992 animated movie with music and lyrics ...

Aladdin is ranked on...

Aladdin is also found on...