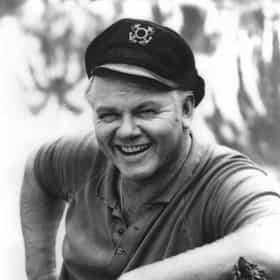 Alan Hale Jr. (born Alan Hale MacKahan, March 8, 1921 – January 2, 1990) was an American actor and restaurateur. Hale Jr. was the son of major movie character actor Alan Hale Sr. Hale Jr.'s television career, which spanned four decades, was most noted for his co-starring role on the 1960s series Gilligan's Island. He also appeared on several talk and variety shows. Appearing in over 200 films and television roles, Hale's long acting career began in films in 1941, appearing primarily in Westerns, playing opposite Kirk Douglas in The Big Trees (1952), Audie Murphy in Destry (1954), Ray Milland in A Man Alone (1955), Robert Wagner in The True Story of Jesse James (1957) and Hugh Marlowe ... more on Wikipedia

#716 of 1,149 The Best Actors in Film History 2.2M VOTES The best actors ever are ranked here in this list of the best actors in film history. These are the greatest actors ever to ...
#942 of 2,001 The Greatest Actors & Actresses in Entertainment History 1.7M VOTES The best actors and actresses of all time, male and female, ranked by film fans worldwide. This list of greatest actors and ...
#552 of 931 People We Wish Were Still Alive 3.2M VOTES RIP to our world's greatest achievers, those who changed the way we live and the ways we thought. This list of people we wis...
#307 of 505 The Best TV Actors of All Time 106k VOTES The greatest TV actors of all time. Some of these actors have been in movies, some of them are even more well known at this ...
The Locations of All Hollywood Walk of Fame Stars 417.8k VIEWS A list of stars on the Hollywood Walk of Fame, with photos. This list includes all television and movie stars. Acquiring a s...
50+ Famous Juniors 112.3k VIEWS This list of famous juniors has been loosely ranked by fame and popularity. Several famous actors, musicians, and athletes a...