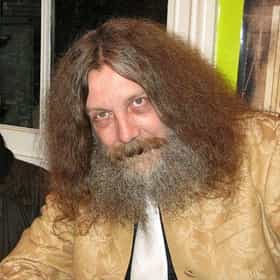 Alan Moore (born 18 November 1953) is an English writer known primarily for his work in comic books including Watchmen, V for Vendetta, The Ballad of Halo Jones, Swamp Thing, Batman: The Killing Joke and From Hell. Regarded by some as the best comics writer in the English language, he is widely recognized among his peers and critics. He has occasionally used such pseudonyms as Curt Vile, Jill de Ray, and Translucia Baboon; also, reprints of some of his work have been credited to The Original Writer when Moore requested that his name be removed.Moore started writing for British underground and alternative fanzines in the late 1970s before achieving success publishing comic strips in ... more on Wikipedia

The Best Alan Moore Books 1.5k votes List of the best Alan Moore books, ranked by voracious readers in the Ranker community. With commercial success and critical...
Why Alan Moore Doesn't Want You To Watch The 'Watchmen' 21k views Those looking for Alan Moore’s name in the credits of HBO’s Watchmen series may be surprised to find he’s been left out - an...

Alan Moore is ranked on...

#650 of 1,183 The Best Writers of All Time 296.3k VOTES The pen is truly mightier than the sword, and if you’re a book enthusiast you know that to be true. Some of history’s most i...
#274 of 313 Famous People Most Likely to Live to 100 12.9k VOTES Sometimes, age really is just a number. But these healthy old celebrities seem to be defying time like no others. These clas...
#214 of 253 The All-Time Greatest Horror Writers 95.3k VOTES The best horror novelists include some great authors who manage to weave fantastical tales of horror that leave readers scar...
Famous (Alleged) Ordo Templis Orientis Members List 68.8k VIEWS List of Famous Ordo Templis Orientis Members ranked by fame and popularity. Ordo Templis Orientis otherwise known as OTO is ...
Famous People Whose Last Name Is Moore 15.9k VIEWS Being a fairly common name, it's no surprise there are a lot of famous people with the last name Moore. Do you recognize all...
13 Famous People Who Allegedly Practiced Black Magic 404.4k VIEWS Humans have always been captivated by the mysteries of the universe and the secrets of life and death. People use the o...
Celebrities Who You Never Knew Were Partially Blind 538.2k VIEWS List of famous people with one eye ranked by fame and popularity. Many famous people have experienced a great deal of succes...

Alan Moore is also found on...