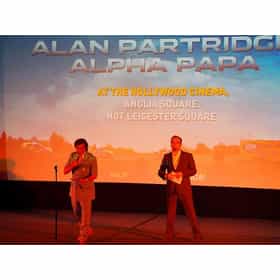 Alan Partridge: Alpha Papa is a 2013 British action comedy film starring Steve Coogan reprising his role as Alan Partridge, a fictional presenter he has played on various BBC radio and television shows since 1991. The film was directed by Declan Lowney and written by Coogan, Armando Iannucci, Peter Baynham, Neil Gibbons, and Rob Gibbons. Principal photography began on 7 January 2013 in Norwich and Mitcham, and the film premiered on 24 July 2013. The film was released in the United Kingdom and Ireland on 7 August 2013, where it opened at number one in the box office. Magnolia Pictures distributed the film in America. A book of the screenplay was published on 21 November 2013. ... more on Wikipedia