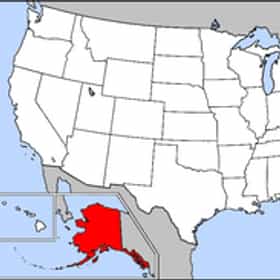 Alaska is a U.S. state situated in the northwest extremity of the North American continent. Bordering the state to the east is the Canadian territory of Yukon and the Canadian province of British Columbia, the Arctic Ocean to the north, and the Pacific Ocean to the west and south, with Russia further west across the Bering Strait. Alaska is the largest state in the United States by area, the 4th least populous and the least densely populated of the 50 United States. Approximately half of Alaska's 735,132 residents live within the Anchorage metropolitan area. Alaska's economy is dominated by the oil, natural gas, and fishing industries, resources which it has in abundance. Tourism is ... more on Wikipedia

Hawaii
Creepy Legends and Stories from Alaska 231.5k views You've come a long way, and the sign up ahead says, "Welcome to Creepy Alaska." This is the Last Frontier, a realm...
The Best Musical Artists From Alaska 142 votes Here are the best artists and bands from Alaska. There may not be a ton of bands and singers coming out of Alaska. However, ...
10 Ice Cold Killers From Alaska That Will Make You Fear The Last Frontier 68.5k views Cold, barren, remote, and stunningly beautiful, Alaska is a popular destination for people who want to travel off of the bea...
Inside Whittier, Alaska, The Town Where Everyone Lives In The Same Exact Building 461.5k views Whittier, Alaska is a town of some 220 people situated about 60 miles from Anchorage at the top of the Passage Canal. There ...
21 Haunting And Beautiful Vintage Photos Of The Alaskan Frontier 675 votes The US purchased the Alaskan territory from the Russian Empire in 1867, but Alaska didn’t officially become a US state until...
The Best NBA Players from Alaska 165 votes Here are the best NBA players from Alaska. Featuring Hall of Fame greats, superstars, and active players, this list of baske...
The Best NFL Players From Alaska 36 votes Here are the best NFL players from Alaska! While not an extensive list, the top Alaskan NFL players do have some Super Bowl ...

Alaska is ranked on...

Alaska is also found on...