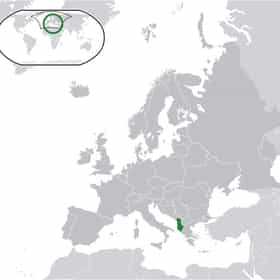 Albania, officially known as the Republic of Albania, is a country in Southeastern Europe. It is bordered by Montenegro to the northwest, Kosovo to the northeast, the Republic of Macedonia to the east, and Greece to the south and southeast. It has a coast on the Adriatic Sea to the west and on the Ionian Sea to the southwest. It is less than 72 km from Italy, across the Strait of Otranto which links the Adriatic Sea to the Ionian Sea. Albania is a member of the United Nations, NATO, the Organization for Security and Co-operation in Europe, the Council of Europe and the World Trade Organization. It is one of the founding members of the Energy Community and the Union for the ... more on Wikipedia

Albania is ranked on...

Albania is also found on...