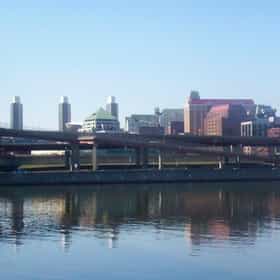 Albany is the state capital of New York and the seat of Albany County. Roughly 135 miles north of the City of New York, Albany developed on the west bank of the Hudson River, about 10 miles south of its confluence with the Mohawk River. The population of the City of Albany was 97,856 according to the 2010 census. Albany has close ties with the nearby cities of Troy, across the river; Schenectady to the west on the Mohawk River, and Saratoga Springs to the north, forming a region called the Capital District. This is comprised mostly of the Albany-Schenectady-Troy Metropolitan Statistical Area. The area's 2010 population was 870,716, the 4th-largest MSA in New York and the 58th largest ... more on Wikipedia

Albany is ranked on...

#76 of 116 The Most Underrated Cities in America 58.7k VOTES When you think of the coolest American cities, you probably imagine places like Los Angeles and New York. But there is so mu...
#104 of 226 The Worst Cities in America to Live in or Visit 85.9k VOTES The worst US cities to live in or visit, ranked by hundreds of voters who have had the misfortune to actually go to these pl...
#117 of 372 The Coolest Cities in America 126.7k VOTES This super cool list of the coolest cities in the U.S. has been ranked by the many chill, awesome people who have visited or...
#24 of 40 The Best Cities for Allergies 1k VOTES List of the top cities for people with allergies. It comes around every Spring, that plague known as allergy season. You may...
#79 of 123 The Best Places to Go Hang Gliding 1.2k VOTES This is a ranked list of the best places for hang gliding as voted on by men and women. These places include some of the mos...

Albany is also found on...