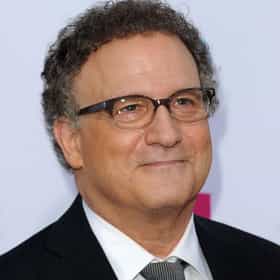 Albert Lawrence Brooks (born Albert Lawrence Einstein; July 22, 1947) is an American actor, comedian, writer, and director. He received an Academy Award nomination for Best Supporting Actor for 1987's Broadcast News and was widely praised for his performance in the 2011 film Drive. His voice acting credits include, Marlin in Finding Nemo (2003) and Finding Dory (2016), and recurring guest voices for The Simpsons, including Russ Cargill in The Simpsons Movie (2007) and Hank Scorpio. He has written, directed, and starred in several comedy films, such as Modern Romance (1981), Lost in America (1985), and Defending Your Life (1991). He is also the author of 2030: The Real Story of What ... more on Wikipedia

Albert Brooks is ranked on...

#271 of 362 The Funniest People of All Time 864.3k VOTES The funniest people of all time are a mix of actors, comedians, and even a few people who probably didn't start off trying t...
#180 of 335 The Greatest Actors Who Have Never Won an Oscar (for Acting) 449.7k VOTES There are many actors who haven't won an Oscar. For 95 percent of the acting population, there is probably a good reason the...
#158 of 408 People who voted for Albert Brooks... also upvote Audrey Hepburn on The Greatest Actors & Actresses in Entertainment History The Funniest Stand Up Comedians Of All Time 999.5k VOTES A ranked list of the best stand up comedians in the history of the art form. First and foremost, all of the people on this l...
#395 of 783 The Greatest Directors In Movie History 300.1k VOTES List of the greatest directors in movie history, who are most deserving of Academy Awards and critical recognition. The list...
#55 of 150 The Best Animated Voiceover Performances 142.9k VOTES This list contains information about the best animated voiceover performances in film, ranked by your votes. Several famous ...
#26 of 75 The Greatest Guest Appearances in The Simpsons History 8.1k VOTES With 25+ seasons completed and seemingly no end in sight, there is certainly no shortage on the number of celebrity guest st...
#27 of 101 The Greatest Hollywood Screenwriters Of All-Time, Ranked 1.2k VOTES Who are the best screenwriters of all time? That's a question you get to answer. Without great screenwriters, there wouldn't...
#18 of 161 People who voted for Albert Brooks... People in the Midwest are 2x more likely to vote for this These Big-Name Celebs Have Been Hiding Their Real Names 99.7k VOTES List of real names of celebrities, including actors, singers, wrestlers, and even politicians. Many actors and actresses use...
#29 of 41 Comedians Who Use Stage Names 1.1k VOTES These comedians knew that it's tough to make a name in comedy and that literally making themselves a stage name was the best...
#17 of 20 The Best Male Stand Up Comedians of the '70s 2.6k VOTES The best 70s comedians range from Richard Lewis to Richard Pryor, from David Letterman to David Brenner, and from Bob Newh...
#22 of 65 The Strangest Opening Act Bookings Ever 5.5k VOTES Some of the strangest opening act bookings no doubt leave music fans scratching their collective heads. Most of the time, an...
#28 of 80 The Best Voiceover Performances in Film 11.4k VOTES This list contains information about the best voiceover performances in film, ranked by your votes. Several famous actors an...
#4 of 30 Movie Stars' Very First Tweets 1.8k VOTES List of movie stars's first Tweets. Most A-list actors and actresses from films have Twitter accounts of their own. Some got...
Celebrities You Didn't Know Use Stage Names 1.7M VIEWS List of celebrities with stage names, loosely ranked according to fame and popularity. It's tough to break into show busin...
Famous People Named Albert 11.2k VIEWS If your name is Albert, then you're in some great company. Here's our list of the most famous people named Albert, including...
Actors Who Have Directed Films 12.1k VIEWS Several famous actors and actresses have directed films and many of their films have even gone on to win Academy Awards. A f...
#9 of 56 The Best Romantic Comedy Directors in Film History 210 VOTES Who are the best romantic comedy directors in film history? You get to decide. Making a good rom-com is harder than it looks...
Famous People Whose Last Name Is Brooks 8.4k VIEWS Being a fairly common name, it's no surprise there are a lot of famous people with the last name Brooks. Do you recognize al...
#9 of 140 Dreamcasting Celebrities We Want To See On The Masked Singer 6.7k VOTES The US version of The Masked Singer has taken social media by storm and no wonder. With secret, costumed celebrities and clu...
The Many Loves Of Linda Ronstadt 11.6k VIEWS She’s known for being a beloved rock star, so it’s no surprise that there have been many Linda Ronstadt boyfriends. Read on ...
Famous People Who Voiced Cartoon Characters 4.8M VIEWS   Everyone knows that Walt Disney, Mel Blanc, and Dan Castellaneta have provided the voices to iconic cartoon charact...
Carrie Fisher Loves and Hookups 1.2k VIEWS Who's dated Carrie Fisher? Throughout the late actress' career, Carrie Fisher was romantically involved with a wide ran...
12 Surprising Stories Behind Famous Stage Names 14.6k VIEWS What's in a name? For an actor, actress, or pop star, that name is a brand, identity, and image - so, to answer the que...
‘90s List Of Playboy Interviews 10.4k VIEWS Here is a list of all Playboy interview subjects during the new media age of the '90s. A major part of the magazine appears ...

Albert Brooks is also found on...