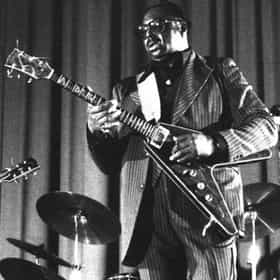 Albert Nelson (April 25, 1923 – December 21, 1992), known by his stage name Albert King, was an American blues guitarist and singer whose playing influenced many other blues guitarists. He is perhaps best known for the popular and influential album Born Under a Bad Sign (1967) and its title track. He is one of the three performers (together with B. B. King and Freddie King) known as the "Kings of the Blues."He was also known as "The Velvet Bulldozer" because of his smooth singing and large size—he stood taller than average, with sources reporting 6 ft 4 in (1.93 m) or 6 ft 7 in (2.01 m), and weighed 250 lb (110 kg)—and also because he drove a bulldozer in one of his ... more on Wikipedia

The Best Albert King Albums of All Time 217 votes Albert King, a member of the Rock N Roll Hall of Fame, is also considered one of the best blues artists of all time. Here, y...

Albert King is ranked on...

#644 of 2,186 The Greatest Musical Artists of All Time 13.4M VOTES When VH1 polled fellow artists to name the greatest artists of all time, it seemed like a good idea---but in reality, the li...
#548 of 1,066 The Best Singers of All Time 2.2M VOTES Who are the best singers of all time? That's a tough question to ask. This list includes many of the greatest, most famous v...
#573 of 2,219 The Best Rock Bands of All Time 3.2M VOTES There are thousands of rock bands that have existed throughout the decades ever since the dawn of rock and roll, but only th...
#44 of 655 People who voted for Albert King... People over 50 are 2x more likely to vote for this The Greatest Guitarists Of All Time 625k VOTES The best guitarists of all time, voted on and ranked by tens of thousands of music fans, with photos and other info. Wi...
#8 of 257 People who voted for Albert King... also upvote James Bond Franchise on Every James Bond Movie, Ranked Best to Worst The Best Blues Artists of All Time 105.3k VOTES Whether you like Muddy Waters, Robert Johnson, or that bluesy broad Etta James, there's now denying they're all some of the ...
#182 of 270 Rank the Rock N Roll Hall of Fame Inductees 301k VOTES A complete list of bands and artists inducted into the Rock and Roll Hall of Fame, ranked in order of preference by music fa...
#45 of 139 The Most Undeserving Members of the Rock Hall of Fame 401.5k VOTES The most undeserving members of the Rock Hall of Fame are all respectable and successful musicians and bands but quite simpl...
#115 of 180 The Best Black Rock Bands 36k VOTES A list of the best black rock bands including a few afro-punk and black alternative bands. While black rock musicians and af...
#8 of 162 The Best Blues Rock Bands and Artists 42.7k VOTES Combining bluesy improvs over traditional 12-bar blues, blues rock bands are some of the most important bands in music histo...
The Most Famous Blues Guitarists 146k VIEWS There's nothing quite like the blues, and greatest blues guitarists are part of what makes this musical genre so special. Th...
Famous People Named Albert 11.3k VIEWS If your name is Albert, then you're in some great company. Here's our list of the most famous people named Albert, including...
Famous People Whose Last Name Is King 13.8k VIEWS Being a fairly common name, it's no surprise there are a lot of famous people with the last name King. Do you recognize all ...
#5 of 135 The Best Electric Blues Artists 3.2k VOTES Electric blues artists list, with photos, ranked best to worst by votes. List of good electric blues musicians includes a fi...
Real Names of Famous Blues Guitarists & Singers 1.9k VIEWS While you may know the beloved musicians below by names like Billie Holiday, Ray Charles, and Etta James, these musicians we...
Famous Lead Guitarists 29.8k VIEWS A List of Famous Lead Guitarists with photos! These are musicians who are masters of their craft. While it is often the sing...

Albert King is also found on...