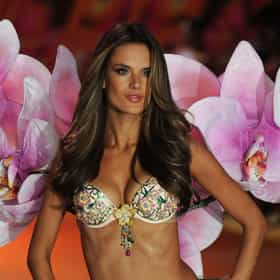 Alessandra Corine Maria Ambrósio (Portuguese: [aleˈsɐ̃dɾɐ ɐ̃ˈbɾɔzju]; born April 11, 1981) is a Brazilian model and television personality. Ambrosio is known for her work with Victoria's Secret and was chosen as the first spokesmodel for the company's PINK line. Ambrosio was a Victoria's Secret Angel from 2000 to 2017 and has modeled for brands such as Next, Armani Exchange, Christian Dior, and Ralph Lauren. In 2012, she was ranked number six on Forbes' list of the highest-paid models, estimated to have earned $6.6 million in one year. She is often cited by the popular media as one of the world's sexiest women. As an Angel, she was chosen as one of People magazine's annual ... more on Wikipedia

Alessandra Ambrosio is ranked on...

#86 of 1,027 The Most Beautiful Women In Hollywood 4.5M VOTES The most beautiful women in the world are a great mix of attractive TV actresses, singers, models, and more, ...
#101 of 280 The Most Beautiful Women Of 2020, Ranked 73.3k VOTES From classic beauties to drop dead gorgeous models, this list features the hottest celebrity women of 2020. Some of the most...
#34 of 1,582 The Most Beautiful Women in the World 5.7M VOTES Naming the most beautiful women in the world is a difficult task because of how subjective it is. Beauty is a mixture of phy...
#72 of 3,139 The Most Beautiful Celebrities Of Our Time 6.3M VOTES This list of hot celebrities is ranked by pop culture junkies worldwide, making it the best place to find the most attractiv...
#33 of 162 The People's 2011 Maxim Hot 100 List 102.5k VOTES Each year, Maxim magazine chooses the most beautiful women to feature on their coveted list of the 100 hottest girls in the ...
#2 of 20 The Top 20 Sexiest Celebrity Women in Business 40.2k VOTES List of sexy business women whose names you recognize. We all know a few sexy women, business women and maybe even celebrity...
#29 of 77 The Most Stylish Female Celebrities 95.9k VOTES The most stylish female celebrities manage to capture our attention with their stunning fashion choices. Whether it's a clas...
#42 of 48 The Most Beautiful Famous Brown-Eyed Girls 99.8k VOTES Here is a list of the most attractive female celebrities with brown eyes. These brown-eyed stars, which happen to ...
#4 of 49 The Most Beautiful Latina Celebrities 222.7k VOTES Who are the most gorgeous Latinas in Hollywood? This list includes some true Latin beauties, women whose exotic looks can st...
#8 of 21 Famous Women with the Best Pairs of Lips 71.4k VOTES The best female celebrity lips are those ladies with the most gorgeous lips around. Be them natural or with some c...
#17 of 66 Hottest Brazilian Fashion Models 43k VOTES List of Brazilian models, including models born in Brazil and female fashion models of Italian descent. These women from c...
#50 of 415 Maxim's Nominees for the 2015 Hot 100 191.4k VOTES Here are Maxim's nominees for the 2015 hot 100. This is the issue of Maxim that gentlemen around the world look forward to m...
#27 of 327 People who voted for Alessandra Ambrosio... People in the Northeast are 2x more likely to vote for this Who Should Be in the 2013 Maxim Hot 100? 134.7k VOTES Maxim Magazine is accepting votes for their 2013 Hot 100 list, but before that's published the Ranker Community is going to ...
#9 of 19 The Best Fur Coats in Pop Culture 970 VOTES Fur coats are the number one way to stay warm, feel glamorous, or make a statement - just ask any of the people on this list...
People Who Have Been Criticized by PETA 30k VIEWS List of celebrities who have been criticized by PETA for wearing fur, selling leather, hunting, promoting meat consumption, ...
The Many Celebrity BFFs Of Kendall Jenner 1.7k VIEWS Kendall Jenner has come a long way since she first appeared on Keeping Up With the Kardashians. She broke out in a...
Celebrity Pregnancies 2012 46.1k VIEWS Celebrity Pregnancies of 2012 feature the top stars from television, film and music all who share one thing in common, they ...

Alessandra Ambrosio is also found on...