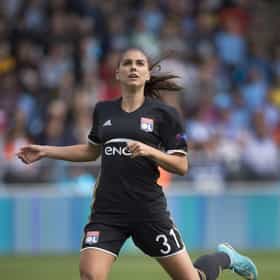 Alexandra Morgan Carrasco (born Alexandra Patricia Morgan; July 2, 1989) is an American soccer player. She is a forward for Orlando Pride in the National Women's Soccer League (NWSL) and the United States national team. Since 2018, she has co-captained the national team with Carli Lloyd and Megan Rapinoe.Shortly after graduating early from the University of California, Berkeley, where she played for the California Golden Bears, Morgan was drafted number one overall in the 2011 WPS Draft by the Western New York Flash. There, she made her professional debut and helped the team win the league championship. Morgan, who was 22 at the time, was the youngest player on the national team at the ... more on Wikipedia

Alex Morgan is ranked on...

Alex Morgan is also found on...