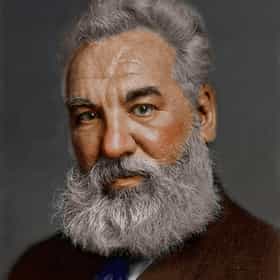 Alexander Graham Bell ('Graham' pronounced ) (March 3, 1847 – August 2, 1922) was a Scottish-born American inventor, scientist, and engineer who is credited with inventing and patenting the first practical telephone. He also founded the American Telephone and Telegraph Company (AT&T) in 1885.Bell's father, grandfather, and brother had all been associated with work on elocution and speech and both his mother and wife were deaf, profoundly influencing Bell's life's work. His research on hearing and speech further led him to experiment with hearing devices which eventually culminated in Bell being awarded the first U.S. patent for the telephone in 1876. Bell considered his invention ... more on Wikipedia

Alexander Graham Bell is ranked on...