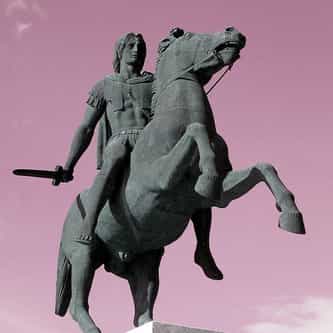 Alexander III of Macedon (Greek: Αλέξανδρος Γʹ ὁ Μακεδών; 20/21 July 356 BC – 10/11 June 323 BC), commonly known as Alexander the Great (Ancient Greek: Ἀλέξανδρος ὁ Μέγας, romanized: Aléxandros ho Mégas), was a king (basileus) of the ancient Greek kingdom of Macedon and a member of the Argead dynasty. He was born in Pella in 356 BC and succeeded his father Philip II to the throne at the age of 20. He spent most of his ruling years on an unprecedented military campaign through ... more on Wikipedia

Alexander the Great IS LISTED ON

#33 of 2,437
2.2M VOTES The Most Influential People of All Time
#58 of 753
2.2M VOTES People We Wish Were Still Alive People outside of the US are 2x more likely to vote for this
#1 of 350
856.1k VOTES The Most Important Leaders In World History
#69 of 1,344
734.9k VOTES The Greatest Minds of All Time
#1 of 410
136.3k VOTES The Most Important Military Leaders in World History
#23 of 98
137.6k VOTES Historical Figures You Most Want to Bring Back from the Dead
#52 of 403
432k VOTES Famous Role Models We'd Like to Meet In Person
#4 of 12
1.2k VOTES What The Drink Of Choice Was For Historical Royals
#1 of 14
29k VOTES Which General Would Win In An All-Out War Between History’s Greatest Military Leaders?
#1 of 16
20.1k VOTES Historical Leaders Called 'The Great,' Ranked By Greatness
#1 of 170
81.9k VOTES If You Fought To The Death, Who Would You Want By Your Side?
#4 of 16
1.9k VOTES Who Was The Toughest Of History’s Legendary Warriors?
#2 of 19
1.2k VOTES Historical Figures Who Were Accomplishing Feats Of Greatness A Lot Younger Than You Thought
#56 of 87
52.2k VOTES People Who Made The World A Better Place
#10 of 14
5.1k VOTES Which Historical Figure Would Win In An All-Night Drinking Competition?
#14 of 14
15.1k VOTES What 14 Historical Figures Really Looked Like According To A.I.
#3 of 16
724 VOTES Which Historical Figure Would Make The Best Batman?
#14 of 19
7.2k VOTES 19 Things People Accomplished When They Were Teenagers
71.7k VIEWS 12 Historical Figures Whose Tombs Have Not Been Found
28.5k VIEWS Signature Afflictions Suffered By History’s Most Famous Despots
97.1k VIEWS All The Kings And Queens Who Were Allegedly LGBTQ+
54.2k VIEWS Major Historical Leaders Who Were Debilitated By Gout, 'The Disease Of Kings'
593.1k VIEWS Historical Figures That Hollywood Got Wrong
34.1k VIEWS The Signature Afflictions Of Historical Figures
454.3k VIEWS Famous People With Epilepsy
42.6k VIEWS Famous People Named Alexander
38.5k VIEWS Historical Figures Who Show Up In The Fate Series
5.5k VIEWS Which Bloodthirsty Conquerer Were You In Your Past Life Based On Your Zodiac Sign
13.9k VIEWS What Historic Military Leader Would You Be Based On Your Zodiac?
74.5k VIEWS 26 Intimidating World Leaders Who You Never Realized Were Super Short
Famous Left Handed People List of Famous Monarchs