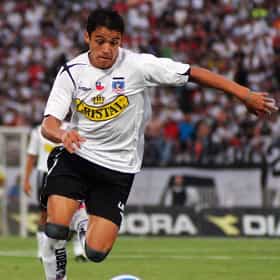 Alexis Alejandro Sánchez Sánchez (Spanish pronunciation: [aˈleksis ˈsantʃes]; born 19 December 1988), also known simply as Alexis, is a Chilean professional footballer who plays as a forward for Italian Serie A club Inter Milan, on loan from English Premier League side Manchester United, and the Chile national team. Sánchez began his career as a youth player for Cobreloa at age 17, completing a season at the club before relocating to Italy to play for Udinese in 2006. He won his first trophies in the following seasons, winning consecutive league titles in loans spells to Colo-Colo and River Plate. In 2008, he returned to Udinese, becoming an integral member of the ... more on Wikipedia

Alexis Sánchez is ranked on...

#494 of 1,409 The Best Soccer Players of All Time 3.7M VOTES Whether you call it soccer or football, this extensive list of the greatest soccer players of all time is ranked by&nbs...
#52 of 158 Who's the Best Player in the Premier League? 168.9k VOTES Who is the best player in the English Premier League? Is it a crafty South American like Sergio Agüero or Alexis S...
#34 of 138 The Greatest South American Footballers of All Time 57.9k VOTES The Greatest South American Footballers as voted on by footy fans across the world. These are the best South American soccer...
#29 of 547 People who voted for Alexis Sánchez... also upvote Star Wars Franchise on The Best Movies of All Time also upvote Arsenal F.C. on The Best Current Soccer (Football) Teams The Best Current Soccer Players 1.7M VOTES The best current soccer players in the world are leading the charge as some of the most iconic stars in the history of ...
#79 of 124 Best Manchester United Players of All Time, Ranked 139.8k VOTES Whenever you think of soccer, the first team that's likely to come to mind is Manchester United. The club is by far and away...
Male Celebrities Who Are 5’5" 8.7k VIEWS This list contains examples of male celebs who are 5'5" loosely ranked by fame and popularity. Although they stand belo...

Alexis Sánchez is also found on...