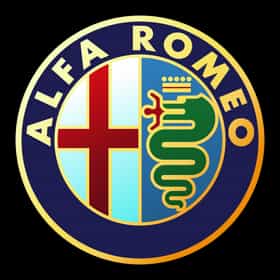 Alfa Romeo Automobiles S.p.A. is an Italian luxury car manufacturer. Founded as A.L.F.A. on June 24, 1910, in Milan, the company has been involved in car racing since 1911. It was owned by Italian state holding company Istituto per la Ricostruzione Industriale between 1932 and 1986, when it became a part of the Fiat group. In February 2007 the Alfa Romeo brand was transformed into the current Alfa Romeo Automobiles S.p.A., a subsidiary of Fiat Group Automobiles S.p.A.. The company that became Alfa Romeo was founded as Società Anonima Italiana Darracq in 1906 by the French automobile firm of Alexandre Darracq, with some Italian investors. In late 1909, the Italian Darracq cars ... more on Wikipedia

Alfa Romeo is ranked on...

#82 of 173 Companies That Have The Best Branding 29.5k VOTES This is a list of the savviest brand managers in the business, ranked by the wisdom of the crowd. Anyone can contribute to t...
#22 of 33 Expensive Car Brands 29.5k VOTES This list includes information on the best expensive car brands, ranked from best to worst by your votes. These top automobi...
#6 of 18 The Best Looking Car Brands 6.8k VOTES Taste is a subjective thing, but elements of style aren't. It is almost universally accepted that proportion, symmetry, shap...
#10 of 48 The Best Italian Brands 2.6k VOTES Italy is home to some of the most beautiful places in the world. The first things that come to our mind when we think about ...
#16 of 45 The Best Auto Engine Brands 13.5k VOTES List of auto engine brands, including the most reliable, popular and inexpensive brands for cars, trucks and other vehicles....
#2 of 52 The Best Italian Sports Car Brands 925 VOTES Everybody drools when they see an Italian sports car drive by; suddenly the Honda you’re in doesn’t seem quite as nice as yo...

Alfa Romeo is also found on...