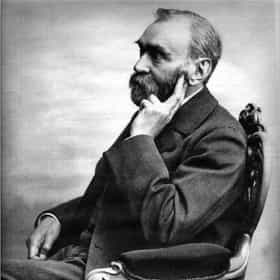 Alfred Bernhard Nobel (; Swedish: [ˈalfrɛd nʊˈbɛlː] (listen); 21 October 1833 – 10 December 1896) was a Swedish businessman, chemist, engineer, inventor, and philanthropist. Nobel held 355 different patents, dynamite being the most famous. The synthetic element nobelium was named after him.Known for inventing dynamite, Nobel also owned Bofors, which he had redirected from its previous role as primarily an iron and steel producer to a major manufacturer of cannon and other armaments. After reading a premature obituary which condemned him for profiting from the sales of arms, he bequeathed his fortune to institute the Nobel Prizes. His name also survives in modern-day companies such as ... more on Wikipedia

Alfred Nobel is ranked on...

#103 of 2,831 The Most Influential People of All Time 2.4M VOTES This is a list of the most influential people of all of human history. This means that the individuals on this list have had...
#140 of 1,472 The Greatest Minds of All Time 736.4k VOTES List of the Greatest Minds of All Time, throughout history. This list represents the most influential thinkers across variou...
Famous People Named Alfred 6.3k VIEWS List of famous people named Alfred, along with photos. How many celebrities named Alfred can you think of? The famous Alfred...
#1 of 21 Famous Swedish Inventors List 114 VOTES List of famous Swedish inventors, listed loosely by relevance with photos when available. These are some of the greatest Swe...
35 Celebs Who Are Scandinavian 22.9k VIEWS Maybe there's something in the air in Scandinavia, or perhaps it's the geography that encourages artists. Whatever the cause...

Alfred Nobel is also found on...