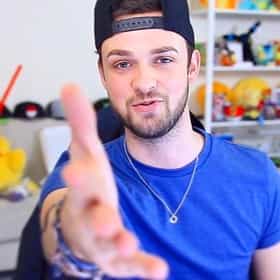 Alastair Aiken (born 6 November 1993), better known by his online alias Ali-A (or his original alias Matroix), is a British video producer best known for his Call of Duty and Fortnite Let's Play commentaries and vlogs on YouTube. His main channel Ali-A has a subscriber count of over 11 million. On his second channel, More Ali-A, he has played a variety of games and the channel is not focused on Call of Duty. More Ali-A has a YouTube subscriber count of 4.8 million and a total of over 880 million video views. ... more on Wikipedia

#32 of 146 The Best Gaming Channels on Youtube 81k VOTES Here are the best gaming channels on YouTube, as voted by fans. Let's Play videos and comedy sketches are just a few of...
#35 of 41 The Best NBA 2K19 YouTubers 14.2k VOTES From downtown, splash! Here are the best NBA 2K19 YouTube channels. From NBA 2K19 tutorials to My Career gameplay, thes...
#4 of 20 Famous YouTubers Who Are Scorpios 239 VOTES On this list you’ll see Scorpio YouTubers, ranked by popularity. This list of famous Scorpio YouTubers - born between Octobe...
#129 of 154 The Best YouTubers Of All Time 298.7k VOTES With YouTube increasingly showing up in the headlines, some of the best YouTubers in the business are crossing over into the...
#17 of 47 The Best English YouTubers 7.4k VOTES Here are the best English YouTubers to watch, like, and subscribe. Featuring gaming channels, comedians, how-to DIY cha...
#6 of 42 The Best Luminosity Gaming Members 6.6k VOTES Here is a list of Luminosity members, ranked from best to worst by fans. If you're ever wondering who is on Luminosity or ho...