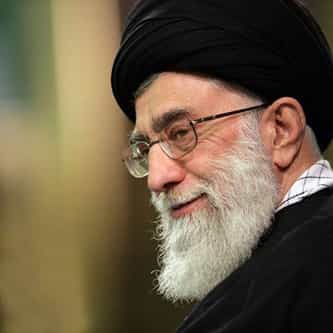 Sayyid Ali Hosseini Khamenei (Persian: سید علی حسینی خامنه‌ای‎, pronounced [ʔæˈliː hosejˈniː xɒːmeneˈʔiː] (listen); born 19 April 1939) is a Twelver Shia Marja' and the second and current Supreme Leader of Iran, in office since 1989. He was previously President of Iran from 1981 to 1989. Khamenei is the second-longest serving head of state in the Middle East (after Oman's Sultan Qaboos), as well as the second-longest serving Iranian leader of the last century, after Shah Mohammed ... more on Wikipedia

Ali Khamenei IS LISTED ON