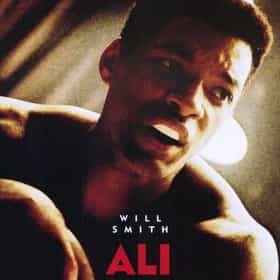 Ali is a 2001 American biographical film directed by Michael Mann. The film tells the story of the boxer Muhammad Ali, played by Will Smith, from 1964-74 featuring his capture of the heavyweight title from Sonny Liston, his conversion to Islam, criticism of Vietnam, banishment from boxing, his return to fight Joe Frazier in 1971, and, lastly, his reclaiming the title from George Foreman in the Rumble in the Jungle fight of 1974. It also discusses the great social and political upheaval in the United States following the passing of Malcolm X and Martin Luther King, Jr. during the presidency of Lyndon B. Johnson. ... more on Wikipedia

List of All Movies Released in 2001 List of Films Scored By Lisa Gerrard Movies Produced by A. Kitman Ho Movies Written By Michael Mann