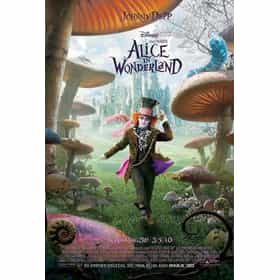 Alice in Wonderland is a 2010 British-American live action and computer animated adventure fantasy film directed by Tim Burton and written by Linda Woolverton. Released by Walt Disney Pictures, the film stars Mia Wasikowska as Alice Kingsleigh with Johnny Depp, Anne Hathaway and Helena Bonham Carter. The film was shot in the United Kingdom and the United States. The story is inspired by the English author Lewis Carroll's 1865 fantasy novel Alice's Adventures in Wonderland and its 1871 sequel Through the Looking-Glass. Wasikowska plays a nineteen-year-old Alice. She is told that she can restore the White Queen to her throne because she is the only one who can slay the Jabberwock, a ... more on Wikipedia

Alice in Wonderland is ranked on...

Alice in Wonderland is also found on...