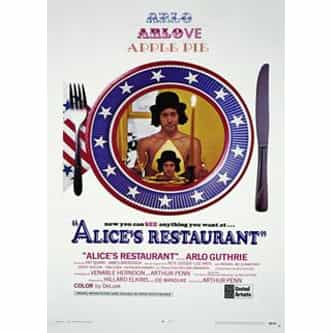 "Alice's Restaurant Massacree", commonly known as "Alice's Restaurant", is a musical monologue by singer-songwriter Arlo Guthrie, released on his 1967 debut album Alice's Restaurant. The song is one of Guthrie's most prominent works, based on a true incident from his life that began on Thanksgiving Day 1965, and which inspired a 1969 movie of the same name. Apart from the chorus which begins and ends it, the "song" is in fact a spoken monologue, with ragtime ... more on Wikipedia

Alice's Restaurant IS LISTED ON