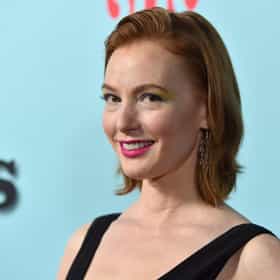 Alicia Roanne Witt (born August 21, 1975) is an American actress, singer-songwriter, and pianist. She first came to fame as a child actress after being discovered by David Lynch, who cast her as Alia Atreides in his film Dune (1984) and in a guest role in his television series Twin Peaks (1990). Witt later had a critically acclaimed role as a disturbed teenager in Fun (1994), and appeared as a music student in Mr. Holland's Opus (1995), and as a college coed in the horror film Urban Legend (1998). She then appeared in Cameron Crowe's Vanilla Sky (2001), Last Holiday (2006), and the thriller 88 Minutes (2007). Witt has made television appearances in The Walking Dead, The Sopranos, ... more on Wikipedia

Alicia Witt is ranked on...

#10 of 163 The Best Hallmark Channel Actresses 254.3k VOTES They're the stars, the moms, the sisters, and the best friends. These Hallmark Channel actresses bring Hallmark Channel Orig...
#7 of 23 The Most Appealing Natural Redheads 253k VOTES Here is the list of the most beautiful women with natural red hair, including actresses, models, and musicians. Redhead...
Hallmark Channel Actors and Actresses 155.4k VIEWS The Hallmark Channel may have a primary group of talent they work with but they also employ a wide range of actors you will ...
26 Celebrities Whose Parents Are Teachers 111.4k VIEWS Can you imagine if Matt Damon's mom or Sandra Bullock's dad taught your math class? What if Alec Baldwin's dad coached your ...
Peter Krause Loves and Hookups 169 VIEWS Peter Krause is an American actor who starred in numerous popular TV shows and movies. Krause started his career in the 1990...

Alicia Witt is also found on...