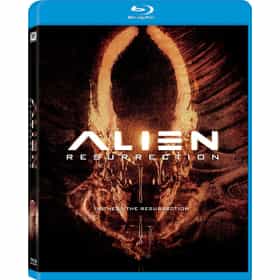 Alien: Resurrection is a 1997 American science fiction action horror film directed by Jean-Pierre Jeunet and written by Joss Whedon. It is the fourth installment in the Alien film series, and was the first film in the series to be filmed outside England, at the 20th Century Fox studios in Los Angeles, California. In the film, which is set 200 years after the preceding installment Alien 3, Ellen Ripley is cloned and an Alien queen is surgically removed from her body. The United Systems Military hopes to breed Aliens to study and research on the spaceship USM Auriga, using human host delivered to them by a group of mercenaries. ... more on Wikipedia

Alien: Resurrection is ranked on...

Alien: Resurrection is also found on...