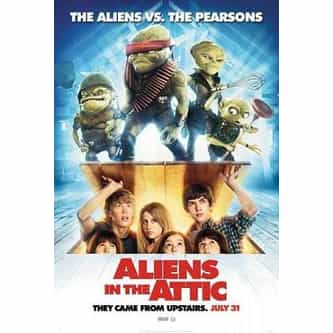 Tagline
Be Afraid. Be Sort-Of Afraid.

Aliens in the Attic

Aliens in the Attic is a 2009 American family science fiction comedy film produced by 20th Century Fox and Regency Enterprises and starring Carter Jenkins, Ashley Tisdale, Robert Hoffman, Henri Young, Regan Young and Austin Butler. The plot revolves around the children in the Pearson family having to defend their vacation house against a group of aliens planning an invasion of Earth. The film was previously titled They Came from Upstairs, which is instead used as the film's tag line. A ... more on Wikipedia

Aliens in the Attic IS LISTED ON