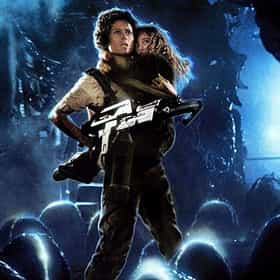 Aliens is a 1986 American science-fiction action horror film written and directed by James Cameron, produced by his then-wife Gale Anne Hurd, and starring Sigourney Weaver, Carrie Henn, Michael Biehn, Paul Reiser, Lance Henriksen, William Hope, and Bill Paxton. It is the sequel to the 1979 film Alien and the second installment of the Alien franchise. The film follows Weaver's character Ellen Ripley as she returns to the planet where her crew encountered the hostile Alien creature, this time accompanied by a unit of space marines. Gordon Carroll, David Giler and Walter Hill of Brandywine Productions, who produced the first film and the later sequels, were executive producers of Aliens. ... more on Wikipedia

Aliens is ranked on...

Aliens is also found on...