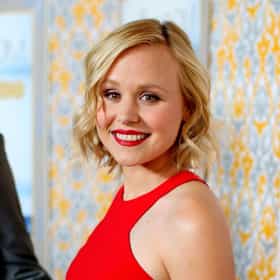 Alison Pill (born November 27, 1985) is a Canadian actress. A former child actress, Pill began her career at age twelve, appearing in numerous films and television series. She transitioned to adult roles and her breakthrough came with the television series The Book of Daniel (2006). That same year, she was nominated for a Tony Award for Best Featured Actress in a Play for her performance in The Lieutenant of Inishmore (2006). Pill had prominent roles in the films Confessions of a Teenage Drama Queen (2004), Plain Truth (2004), Milk (2008), Scott Pilgrim vs. the World (2010), Midnight in Paris (2011), Zoom (2015), Vice (2018), the television series In Treatment (2009), The Pillars of ... more on Wikipedia

Alison Pill is ranked on...

#183 of 326 People who voted for Alison Pill... also upvote Star Trek Franchise on The Best Alien Movies Ever Made also upvote Star Trek Franchise on The Best Space Movies The Best Actresses Working Today 397.6k VOTES List of the best actresses working today, ranked. This list includes many of the greatest actresses in film history, but mor...
#538 of 1,549 The Most Beautiful Women in the World 5.7M VOTES Naming the most beautiful women in the world is a difficult task because of how subjective it is. Beauty is a mixture of phy...
#22 of 33 The 33 Most Stunning And Odd-Looking Women 581.2k VOTES Is it the hair? Is it the nose? Is it the eyes? Gahhh what is it that simultaneously makes these women both beautiful and pr...
#13 of 18 Celebs You Didn't Know Aren't American 2.7k VOTES With the world growing smaller every day, it's no wonder that many of our favorite stars come from other countries. It used ...
30+ Celebrities Who Were Abercrombie Models 163.5k VIEWS Everyone has to start somewhere, right? Well it seems a lot of celebrities started their careers as Abercrombie & Fitch ...

Alison Pill is also found on...