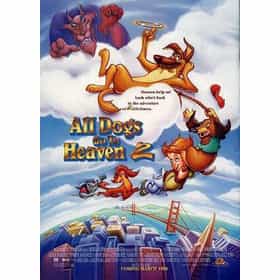 All Dogs Go to Heaven 2

All Dogs Go to Heaven 2 is a 1996 animated musical adventure film, and a sequel to Goldcrest Films' 1989 animated film All Dogs Go to Heaven. Produced by MGM Animation It is directed by Larry Leker and Paul Sabella. Dom DeLuise reprises his role from the first film, while Burt Reynolds, Vic Tayback, and Melba Moore are replaced by Charlie Sheen, Ernest Borgnine and Bebe Neuwirth, respectively. New characters are voiced by Sheena Easton, Adam Wylie, George Hearn and Wallace Shawn. The film was released on March 29, 1996. Don Bluth, the director of the original film, had no involvement with the sequel. It was the second theatrical sequel to a Don Bluth production; the first being An ... more on Wikipedia