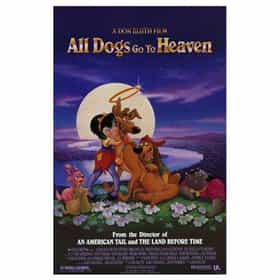 All Dogs Go to Heaven is a 1989 AmericanIrish animated musical adventure comedy film directed and produced by Don Bluth and released by United Artists and Goldcrest Films. The film tells the story of Charlie B. Barkin, a German Shepherd who is betrayed by his friend, Carface, but forsakes his place in Heaven to return to earth where he and his best friend, Itchy Itchiford, team up with a young orphan girl, Anne-Marie, who teaches them an important lesson about honesty, loyalty and love. ... more on Wikipedia

lists about All Dogs Go to Heaven

All Dogs Go to Heaven is ranked on...

#114 of 213 Musical Movies With the Best Songs 103.7k VOTES What are the greatest musical movies with the best songs? This list includes many of the greatest movies ever made, in large...
#148 of 439 The Funniest '80s Movies 178.1k VOTES List of the funniest 80s movies. The best comedy films of the 1980s are listed here in order of greatness. Feel free to crea...
#10 of 102 Movies That Turned 30 in 2019 6.4k VOTES Take a trip down memory lane with this list of movies that turned 30 in 2019. Featuring dramas, cult classics, well-made com...
#22 of 112 The Best Movies of 1989 11.3k VOTES A list of the best movies of 1989, from light dramas like Field of Dreams to action movies like Batman.The '80s were a decad...
#4 of 12 Movies That Weren't Supposed To Be Scary But Terrified You As A Kid 2.8k VOTES From Gremlins to The Witches, from The Nightmare Before Christmas to Goosebumps, there are plenty of children's movies that ...
#14 of 88 Animated Movies That Make You Cry the Most 60.9k VOTES The best animated movies can be just as emotional as even the most moving live action tearjerker. Admit it, there are animat...
#45 of 181 The Greatest Animal Movies Ever Made 61.1k VOTES Some of the best and most beloved movies feature cute pets, barnyard critters, jungle animals, and dangerous beasts. What is...
#5 of 12 Dark Deleted Scenes That Were Wisely Cut From Animated Movies 4.1k VOTES While it's nice to believe that scenes cut from animated movies are usually too silly or irreverent to be included, the trut...
#7 of 16 The Funniest Comedy Movies About Heaven 357 VOTES What would heaven be without a hefty dose of humor and laughter? The funniest comedies about heaven feature newly dead folks...
#67 of 200 The Very Best Children's Movies 70.6k VOTES Kid's movies list--all of the best films for children that were ever made, including classics like E.T. and more recent kid'...
#7 of 100 The Greatest Dog Movies Of All Time 53.9k VOTES Dogs have been featured in films since the dawn of cinema. The best dog movies ever feature cute pups that the audience can ...
#19 of 77 The Best Fantasy Movies of the 1980s 1.1M VOTES "My name is Inigo Montoya. You killed my father. Prepare to die." That's only one of the many memorable quotes tha...
#29 of 142 The Best Classic Fantasy Movies, Ranked 32k VOTES This list contains information on the best classic fantasy movies, ranked from best to worst by user votes. The best classic...
#7 of 46 The Best '80s Cartoon Movies 7.9k VOTES The 1980s brought a ton of explosive, bright, fun cartoon movies to the silver screen. Classics like The Little Mermaid and ...
#27 of 199 The Best G-Rated Animation Movies 11.9k VOTES List of G-Rated animation movies, ranked from best to worst with movie trailers when available. This list takes the best G-R...
#23 of 195 The Best G-Rated Comedies 6.5k VOTES List of G-Rated kids' comedies, ranked from best to worst with movie trailers when available. These comedies are all G-Rated...
#18 of 31 The Best Movies About New Orleans 537 VOTES The horrific events that surrounded Hurricane Katrina, the New Orleans Saints, Mardi Gras, Cajun cooking, jazz music – the...
#11 of 34 The Best Movies About the Afterlife 1.1k VOTES What is it about the afterlife that piques our curiosity? Some of the most intriguing books and movies discuss the possibili...
#19 of 33 The Best G-Rated Animals Movies 733 VOTES List of G-Rated animal movies, ranked from best to worst with movie trailers when available. This list takes the best G-Rate...
#18 of 33 The Best Dog Movies for Kids 576 VOTES There's no shortage of movies about man's best friend and we are here to determine the best dog movies for kids. Whethe...

All Dogs Go to Heaven is also found on...