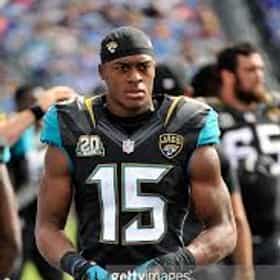 Allen Bernard Robinson II (born August 24, 1993) is an American football wide receiver for the Chicago Bears of the National Football League (NFL). He was drafted by the Jacksonville Jaguars in the second round of the 2014 NFL Draft. He played college football at Penn State. Robinson was born in Detroit. He attended St. Mary's Preparatory, where he played football, and, in his senior season, led the Eaglets to the Division 3 state championship game. He was a teammate of former Penn State quarterback Rob Bolden. In addition to football, Robinson was a competitor for the St. Mary's Preparatory track and field team. Robinson committed to Penn State on November 29, 2010 after being ... more on Wikipedia

Allen Robinson is ranked on...

#465 of 1,540 The Best Football Players Ever 1M VOTES One of the hot topics of debate not only among NFL fans but pundits as well is who is the best football player of all time. ...
#9 of 99 The Best Penn State Football Players of All Time 22.7k VOTES For years, Penn State was known as one of the great bastions of Northeastern football. Located in State College, PA, the sch...
#81 of 140 The Greatest Chicago Bears of All Time 74.8k VOTES These are the greatest Bears of all-time. Since the NFL's inception, the Chicago Bears have been a vital part of the league'...
#35 of 71 The Best NFL Wide Receivers of the 2010s 5.9k VOTES Wide receivers have been some of the most dazzling players in all of the NFL. They can very quickly turn the tide of a game....
#181 of 249 The Best Wide Receivers of All Time 237k VOTES The best wide receivers of all time are a group of elite athletes inclusive of some of the best athletes of all time. The gr...
#36 of 58 Who Is the Best Wide Receiver in the NFL Right Now? 68.7k VOTES Catching a football sounds easy, but imagine running across the field with full gear and an elite defender guarding you ever...
#31 of 46 Who Is the Most Disappointing Player in the NFL in the 2016-2017 Season? 3.5k VOTES As the 2016-2017 NFL regular season comes to a close, fans are either happy with how their teams did or extremely disap...
#23 of 106 The Best Jacksonville Jaguars of All Time 14.1k VOTES A list of the the best Jacksonville Jaguars of all time. The Jaguars are one of the NFL's more recent franchises. Formed in ...
Famous People Whose Last Name Is Robinson 9.9k VIEWS Being a fairly common name, it's no surprise there are a lot of famous people with the last name Robinson. Do you recognize ...
#3 of 20 The Best Jacksonville Jaguars Wide Receivers of All Time 820 VOTES Big fan of Jacksonville football? Then check out this list of Jacksonville Jaguars wide receivers with photos and seasons as...
#3 of 48 The Best Penn State Nittany Lions Wide Receivers Of All Time 328 VOTES The best Penn State Nittany Lions wide receivers ever have all had a part in making Penn State one of the top-tier Division ...
#11 of 30 Who Will Win the 2018 NFL Comeback Player of the Year ? 4.6k VOTES UPDATE: Head over and make your 2019 NFL Comeback Player of the Year predictions. With the NFL season underway, it's time ...
#50 of 54 The Best Fantasy Football WRs Of 2019 395 VOTES The top fantasy wide receivers in 2019 include a combination of new stars taking over the NFL and legends in the l...
Famous People Named Allen 257 VIEWS List of famous people named Allen, along with photos. How many celebrities named Al can you think of? The famous Allens belo...
Famous People Named Allen 1 VIEWS Have you ever realized how many famous people named Allen there are? We put together this list of celebrities named Allen to...

Allen Robinson is also found on...