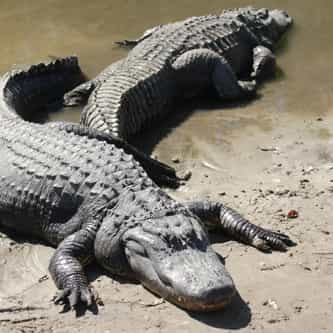 An alligator is a crocodilian in the genus Alligator of the family Alligatoridae. The two living species are the American alligator (A. mississippiensis) and the Chinese alligator (A. sinensis). Additionally, several extinct species of alligator are known from fossil remains. Alligators first appeared during the Oligocene epoch about 37 million years ago.The name "alligator" is probably an anglicized form of el lagarto, the Spanish term for "the lizard", which early ... more on Wikipedia

Alligator IS LISTED ON

#8 of 13
23.9k VOTES 13 Of The Deadliest Texas Animals That'll Make You Watch Your Step In The Lone Star State
#5 of 15
897 VOTES 15 Predators You Can Own As A Pet
#6 of 14
26.3k VOTES 14 Of The Deadliest Animals In Florida
#9 of 14
7.5k VOTES Adorable Baby Versions Of Terrifying Animals
#6 of 10
6.9k VOTES Terrifying Creatures From Louisiana You Never Want To Encounter
#7 of 18
108.6k VOTES 18 Mind-Blowing Photos Of Half Albino (AKA Leucistic) Animals
4.5M VIEWS 38 Incredible Albino (and Leucistic) Animals
18.7k VIEWS Single Moms Of The Animal Kingdom Doin' It For Themselves
746.9k VIEWS 13 Wild Animals That Cause Serious Problems In Florida
21.3k VIEWS The Weirdest Animals You Can Legally Own In The US
12.3k VIEWS 13 Times People Actually Found Animals In Sewers
5.6k VIEWS Rare Photos Of Albino Baby Animals
33.9k VIEWS People Who've Eaten Exotic Animals Reveal What They Taste Like