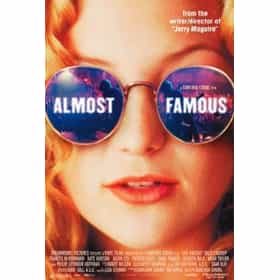 Almost Famous is a 2000 comedy-drama film written and directed by Cameron Crowe and starring Billy Crudup, Kate Hudson, and Patrick Fugit. It tells the fictional story of a teenage journalist writing for Rolling Stone magazine in the early 1970s while covering the fictitious rock band Stillwater, and his efforts to get his first cover story published. The film is semi-autobiographical, as Crowe himself was a teenage writer for Rolling Stone. The film is based on Crowe's experiences touring with rock bands Poco, The Allman Brothers Band, Led Zeppelin, Eagles, and Lynyrd Skynyrd. Crowe has discussed how during this period he lost his virginity, fell in love, and met his heroes — ... more on Wikipedia

Almost Famous is ranked on...

Almost Famous is also found on...