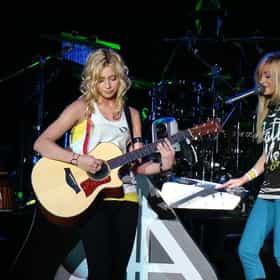 78violet, formerly known as Aly & AJ, is an American pop duo that consists of sisters Alyson "Aly" and Amanda Joy "A.J." Michalka. They signed a recording contract with Hollywood Records in 2004. Their debut album, Into the Rush debuted at number 36 on the US Billboard 200, and was later certified gold by the RIAA. It has sold 839,000 copies domestically and one million worldwide. Their second album, Insomniatic, peaked at #15 on the Billboard 200, selling over 39,000 copies in its first week and became Aly & AJ's highest debut to date. In 2009, Aly & AJ renamed themselves 78violet and officially announced their departure from Hollywood Records the ... more on Wikipedia

#531 of 542 The Greatest Pop Groups & Artists of All Time 589.5k VOTES For years, pop music has dominated your radio dial. No matter where you listen, there's no doubt that pop music bands and po...
#133 of 324 The Best Pop Rock Bands & Artists 1G VOTES Over the years, pop rock has come to dominate the radio waves. Mixing a catchy pop sound with light (read: not serious) lyri...